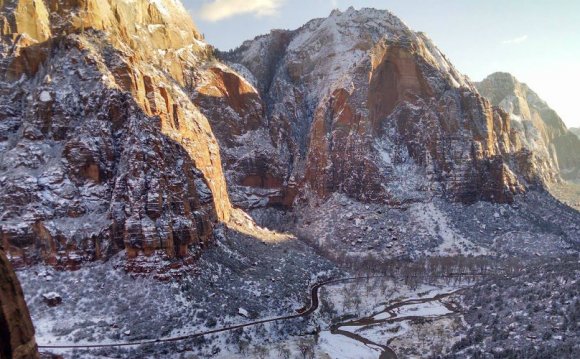 does not contain one main canyon, but rather a dozen smaller ravines eroded into the east side of a ridge running approximately north-south at the edge of the Paunsaugunt Plateau in southwest Utah. This erosion has resulted in thousands of bizarre and fragile rock formations, large and small, in many subtle shades of pink, white, yellow, orange and red, extending in quite a narrow band for over 25 miles along the plateau rim. The national park is named after Ebenezer Bryce, a Mormon farmer who was the first modern-day settler in the region, and was established in 1924.

The main ridge forms part of the Pink Cliffs, which are the highest and most geologically recent of a series of escarpments known as the Grand Staircase that stretches across much of south Utah, formed by erosion and uplift of differently colored sandstone rock layers. The cliffs are named according to the dominant rock color: (running northwards, from the Grand Canyon) - Chocolate, Vermilion (visible most spectacularly around Lees Ferry, Arizona), White (which surround Zion Canyon), Gray and Pink. Most of the Grand Staircase is now contained within the BLM-managed Grand Staircase - Escalante National Monument. The rocks that give Bryce Canyon its distinctive colors are members of the Claron Formation, a mixed limestone/sandstone layer, and are also found exposed, with similarly intricate forms, in other nearly locations such as Red Canyon and Cedar Breaks.

Water is responsible for creating the rock shapes in Bryce Canyon National Park. Rain and melting snow flowing down the Pink Cliffs towards the Paria River form ridges, or fins, which subsequently erode into the spires, pinnacles and other shapes (collectively known as 'hoodoos') which are left standing. In time these too erode, and the whole process moves very gradually westwards as more of the cliff is slowly worn away. During the long, cold winters, the cliffs are further weakened by freezing water expanding in cracks, resulting in more erosion when the ice thaws in spring. See also:
Source: www.americansouthwest.net