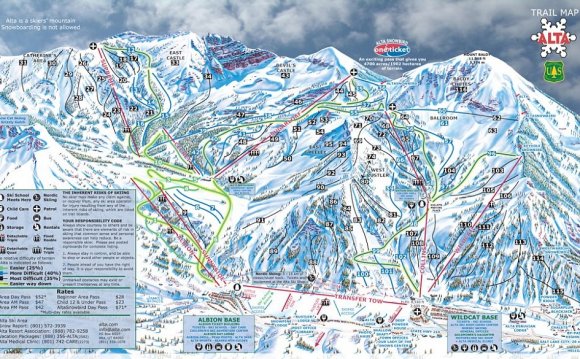 In, an idea to connect seven of the state's best ski areas on a single lift ticket. For decades, Utah skiers have thrown around the idea of connecting Alta, Brighton, the Canyons, Deer Valley, Park City Mountain Resort, Snowbird, and Solitude. But this is the first time that Ski Utah and all of the included ski areas are on board. If it happens, ONE Wasatch would rival European resorts in size and scale, with 18, 000 acres and 100 chairlifts. Now, there's a new map out detailing lift alignments for two of the three potential connections.

Here's the new map from ONE Wasatch (click to expand):

As you can see, it shows the potential connections between:

The third connection between Canyons Resort and Park City Mountain Resort is left off and marked TBD. Why? Well in case you've been living under a rock, those two ski areas are embroiled in a nasty lawsuit (head this way for all that info).

There are still no specific timelines for when the project might happen, but chairlift alignments are a big step forward. It shows that ski resort managers are on board and that Ski Utah is committed to making this happen. It's also important to note that all three connections would be made on 100% private land, and the lifts would be 100% privately funded by the resorts who operate them. Initial estimates are less than $30 million for all three connections, which is a steal to get 18, 000 connected acres.