What National Parks are in Utah? 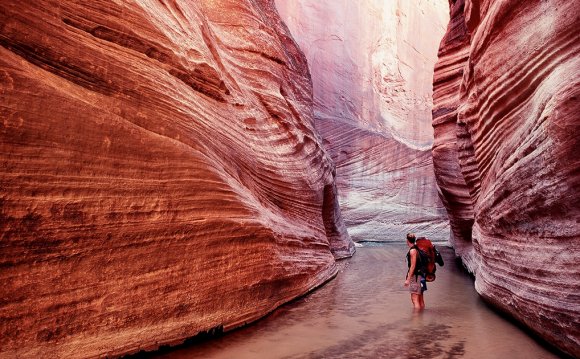 Sometimes you get your heart’s desire, and it’s too much. On May 23, the Utah Highway Patrol had to close the entrance to Arches National Park after traffic got backed up for five miles on the highway into nearby Moab.

Southwest of Arches, Zion National Park and its gateway town of Springdale also suffer from too many visitors and too little money to manage the impacts of the crowds. Zion has seen an annual 28 percent increase in visitation to around 3.2 million visitors a year. Arches National Park was up 19 percent in 2014, and will likely match that increase this year.

The spiking visitor numbers may be partly attributed to a $12 million dollar advertising campaign, launched by the Utah Office of Tourism and specifically focused on Utah’s national parks. The multimedia ad blitz, known as “The Mighty 5 Campaign, ” is designed to bring out-of-state visitors to southern Utah. The tourism office claims that for every dollar spent on its ad campaign, $5.90 in income will flow to state businesses, and $960 million will return through local and state taxes.

Swamping Utah’s national parks with visitors may boost local business traffic, but it also stresses the region’s gateway communities. Local citizens complain that the state has yet to dip in to those tourist-generated taxes to fund their strained medical clinics, sewer and water systems, law enforcement and transportation. Springdale’s medical clinic, for example, is funded by residents and run by part-time staff. Meanwhile, all the new hotels are overwhelming the antiquated sewer and water systems in this vulnerable canyon.

“Many local citizens and park employees would like to request that you stop your ad blitzes, which must cost millions, ” said Springdale resident Betina Lindsey in an open letter to the state published in the St. George Independent. “You might say you are bringing jobs. No, you are bringing tourism and unsustainable consumerism to a fragile ecosystem.”

Even as the state turns a blind eye to the real cost of tourism in southern Utah, the National Park Service has been struggling to keep its head above water ever since a 5 percent budget cut in 2012. Lack of money has forced parks to reduce staff in law enforcement, maintenance and public education. Overall, the national parks face an $11.5 billion maintenance backlog because of inadequate congressional appropriations over many years. Zion’s backlog alone accounts for $62 million.

For parks like Zion and Arches, fewer staff means fewer rangers to do safety patrols or greet and educate visitors, and fewer workers to fix deteriorating roads, rest rooms and trails. And when visitors don’t see rangers out in the field, they are more likely to damage national heritage resources with graffiti, vandalism, off-road driving and trash.

“We are seeing a very high level of visitation - a significant increase, ” says Kate Cannon, superintendent of Arches National Park. “It’s difficult for us to keep up with the demands of visitors on facilities and on search and rescue. We have gridlock at the parking lots. People’s experience at Arches should not be about trouble finding a place to park.”

The National Park Service’s budget problems, however, will receive little help from the Utah congressional delegation. The agency’s budget is only one-fifteenth of 1 percent of the federal budget, but despite the fact that the national parks are a big economic draw for Utah, the state’s elected officials consistently vote against the parks’ financial needs.