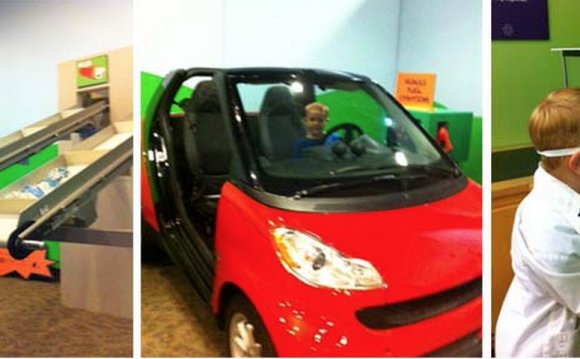 Events and Dino Days in Dixie

First and foremost, The Dinosaur Discovery Site represents the remarkable discovery of an Early Jurassic lakeside environment and the thousands of tracks of primarily carnivorous dinosaurs that roamed the shoreline in search of food. The tracks are preserved in sandstone that has locked in both the details of the print and the actions of the printmaker. Because of its location along the shores of that prehistoric lake, the largest collection of dinosaur swim tracks is also housed at this facility and many of these blocks are on display. Other Early Jurassic fossils found here include tracks of arthropods, fish swim trails, and sedimentary structures, all of which tell the story of the area approximately 200 million years ago.

Located onsite is a preparation lab staffed by well-trained volunteers that handle and clean fossil samples from this site as well as others in Southern Utah. They also work on the large blocks throughout the museum and outside the facility as well as the surface tracksite. These reproductions help tell the story of the region's early inhabitants to visitors and help them visualize the animals that made these remarkable tracks. Since there are no commercial replicas of Early Jurassic animals that represent the site's trackmakers, they had to be constructed specifically for us by local artists. Dr. Jerry Harris, site consultant and Director of Paleontology, Dixie State University, and Andrew Milner, site paleontologist and curator, worked with local artists to construct restorations that are accurate in every detail. These currently include a juvenile Dilophosaurus, a Megapnosaurus, a recently added Jurassic pterosaur, Dimorphodon, as well as a Scutellosaurus, and a new favorite, Protosuchus.

Other replicas include the only Scelidosaurus on display in the Americas, other pterosaur replicas, and several legs and feet of later Utah trackmakers such as Allosaurus and Utahraptor.

Our Special Display area is a space where we can tell other stories of interest to our visitors. These temporary displays have included such topics as dinosaur eggs, historical inaccuracies in early paleontology, how dinosaurs get their names, as well as origami of dinosaurs and other prehistoric animals. We try to have an interactive component with each of these displays to engage the minds and interests of our patrons. Click here to see our current paleontology displays. An interactive area for children inside the museum includes spaces to do dinosaur stencils and rubbings, as well as play with dinosaur toys. Dinosaur puzzles are available to put together as well as various dinosaur books to read. Children can have fun in this area after seeing the museum, or this can be the spot where one parent can entertain a younger child while the others enjoy the exhibits.

Outside of the main building, the Dino Park is beginning to take shape. Built around an existing sandpile that contains tracks for youngsters to "find, " additional interactive areas are appearing or planned for the near future. There are several blocks around the walkways that have fossilized bones embedded in them that can be touched and studied to see the differences in fossilization.

We currently have a "track box" where children can enter through a large dinosaur track and see out through various accurately-depicted and sized footprints. Additionally, there is a track-making area that has various "dino feet" to use to make several types of dinosaur footprints. A sandbox on legs is available to either make additional tracks or uncover replica fossils and is a convenient height for individuals using wheelchairs or just standing. These projects have been sponsored in part by the Utah Arts & Museums, with funding from the State of Utah.